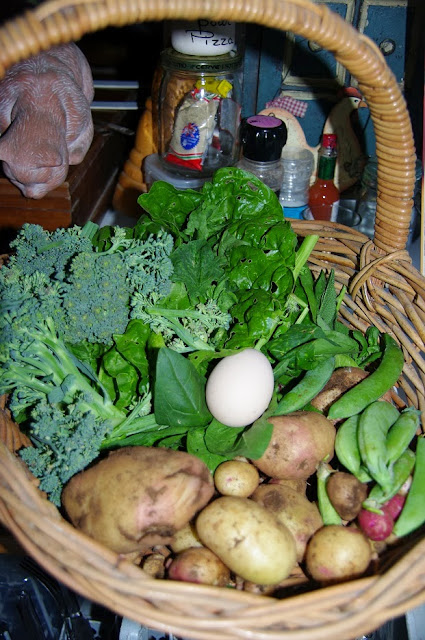 Oh and an egg. 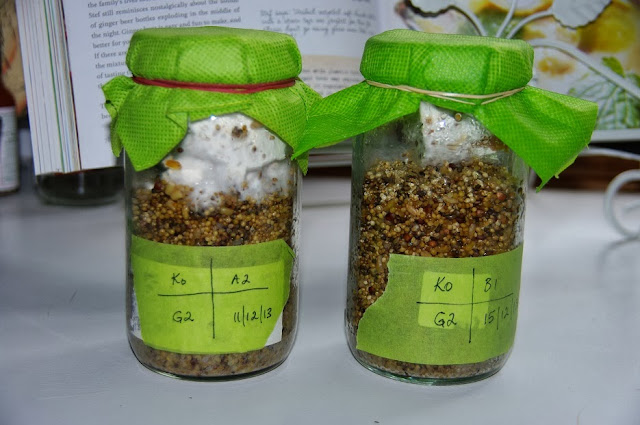 My mycelium is running!

Now a few weeks ago I could not have imagined saying such words. Largely because I didn't know such a combination of words existed, let alone what they meant or that I could be excited by them.  But I am very excited.

A few days ago I did my first grain to grain transfer into the jar on the left.  It looked like the one on the right that I did today -  a solid mass of white stuff sitting on top of the grain. But after only a few days you can see that the white has softened, gone fluffy and is seeping down into the grain. The white stuff is mycelium or fungi that will produce mushrooms. And it is running into the grain.

Its hard to believe I am doing it right and that I truly am going to be able to grow my own mushrooms at home from a tissue sample. Wow. I went to the course with the best intentions of putting it into practice but must admit day one spooked me. I didn't think I could do it.  I wish my science teachers could see me know. In fact I wish they had taught me this. Wow I would have love science class.

Oh there are so many adventures ahead now I know I can do it.  If I can, anyone can.

Posted by Jodie at 7:58 PM No comments: Links to this post

A couple weeks ago I did a mushroom cultivation with Milkwood Permaculture. Wow it blew my head. By the end of day 1 I was convinced that it was interesting but not something I could do. Too hard, too complicated. I was never any good at science.

The course was in Sydney so I stayed over night with a good friend who took me out to a great vegetarian restaurant. We had fun. And overnight something shifted. I became determined to learn everything I could in the course and give it a go.

Well I learnt the most amazing things. I know how to take a mushroom, take a small tissue sample out of it, grow it in agar in a petri dish, transfer it to grain to give it more space to grow, then to a bigger container of grain, then to a coarse substrate of straw.  Then harvest my own home grown mushrooms. It still does my head in but I know I can do it. 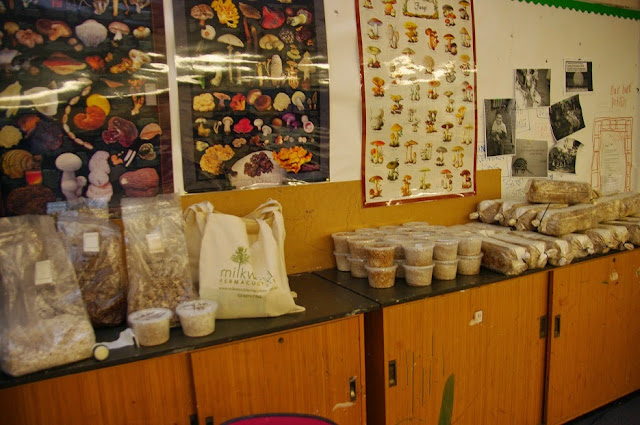 I have spent the last few weeks gathering equipment. I needed a pressure cooker and still air glove box like this: 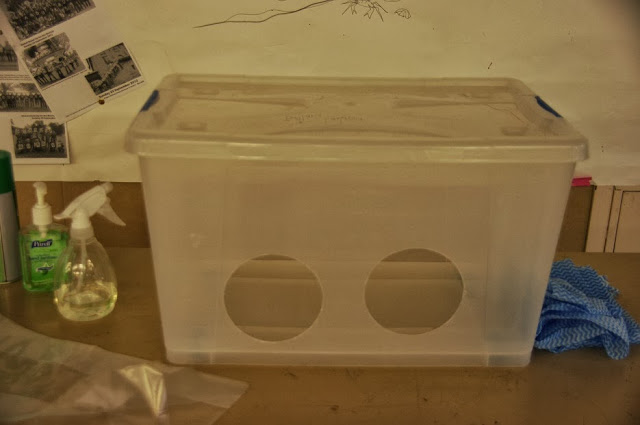 My order of petri dishes arrived this week.  I am ready to go.

I am very exciting about honing my skills, and will share my stories because I want others to know that you too can grow mushrooms from home. It greatly expands your repertoire of home grown produce, adds considerably to your nutrition and options.  Once I master this and a course comes up I am going to learn bee keeping.  I suddenly feel like I am winning on the homespun front. 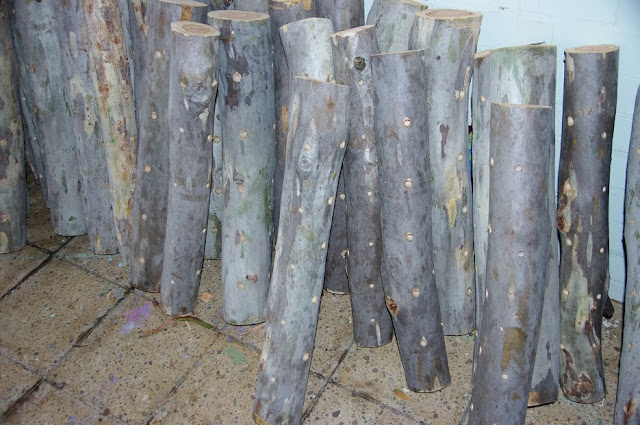 Eucalypt logs innoculated with shiitake spawn that we prepared in the class.

Posted by Jodie at 7:55 PM No comments: Links to this post 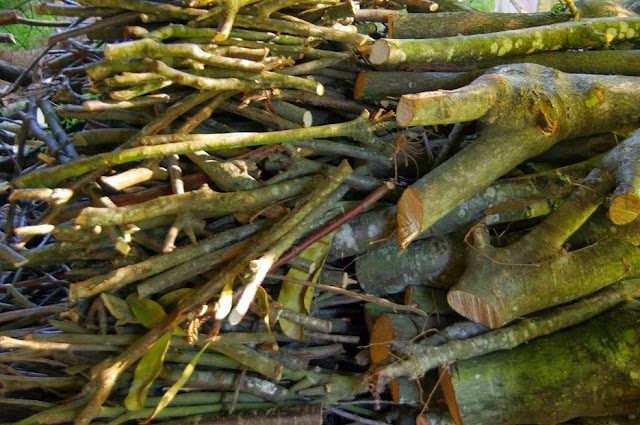 One of the open gardens we went to recently advertised that they recycled all green waste onsite. I think Howard said something like: "So what!" The point is: we have been doing this for years.

Its not really that hard. It does take a little space but I think everyone with a yard could do it. It would be much trickier for apartment dwellers but if the body corporate got together they could do it too. Whether tree prunings, vegetable scraps, chicken coop scrapings or paper we recycle it all back into the garden. Maybe my system will give you a few ideas that you can try for yourself. My advice, pick one new thing, try it until it works for you and then add another. Overwhelming yourself by doing everything at once can lead to giving up.

When we prune trees, hedges or anything woody we chop up the leftovers and mulch as much as we can. For this we have a beast of a petrol mulcher. This was the pile we had from the waratah we had to prune heavily. 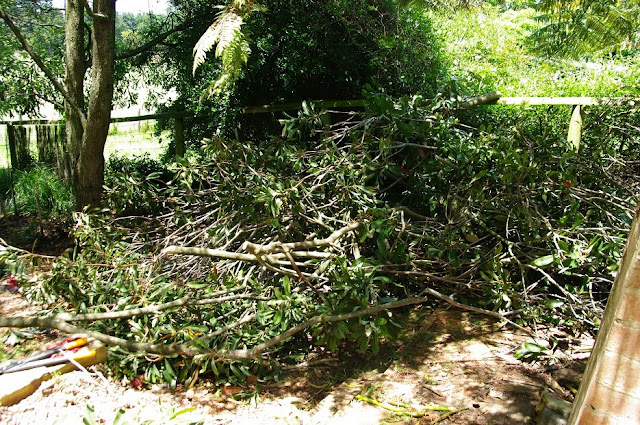 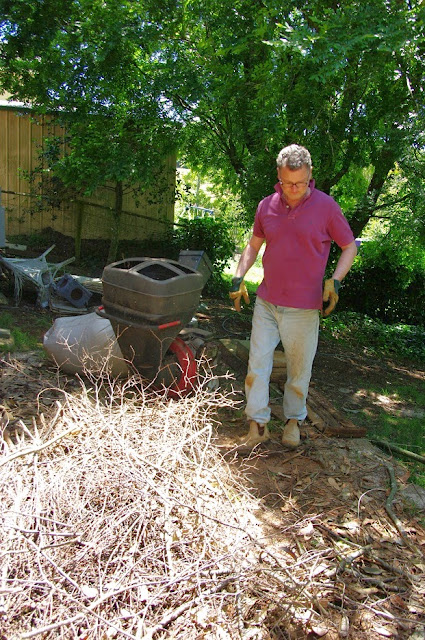 The mulch turns out really fine. We spread it under the waratah and a tree fern to make a nice new garden bed. 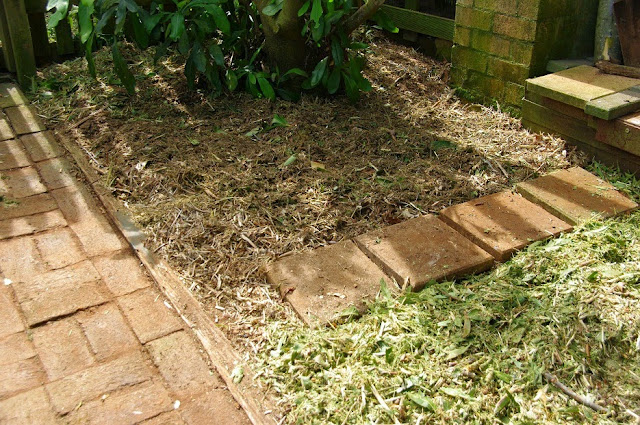 The thicker, woodier parts we chop up and dry for future firewood. The ash from the fire eventually ends up in the compost.

Food scraps have a few options depending on what they are: they can go to the worm farm, chickens or straight to the compost bin. Egg shells either end up ground up for the chooks or put on plants to fertilise them and keep slugs away.

Paper such as bills or thin cardboard gets shredded and either put into the chickens' nesting box or into the fire if we need kindling. I also bring shredded paper home from work, as well as old newspapers for mulching the garden. We have two plastic compost bins. Just keep layering and stirring.  See my previous post on composting here.

Round and round it goes.  But none of it goes into the garbage bin or leaves our yard. Sound doable? This isn't a complex system but I'm a bit proud that it works.

Posted by Jodie at 1:58 AM No comments: Links to this post

My name is Jodie. I live in the magnificent Southern Highlands of New South Wales, Australia with my husband, two dogs, two cats and two chickens. This blog chronicles my journey to a simple, authentic, homespun life full of sewing, cooking and home grown food and my passion for living a balanced, energetic life full of all the things we love. Welcome!

Promote Your Page Too